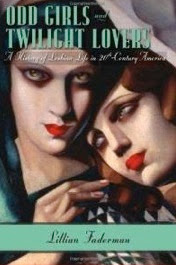 REVIEWS
The Village Voice: "Odd Girls reverberates with the powerful voices of people speaking for themselves.... Faderman empowers her subject; instead of allowing lesbian lifestyles to be defined from the outside, her voice and those of other women transcend destructive stereotypes and misconceptions. Odd Girls offers a lucidly written and moving narrative of lesbian culture and community during its formative years."

Francine Prose, Los Angeles Times Book Review "Fascinating... poignant and moving... Odd Girls is full of facts and wonderful details that readers may not have encountered, things that are a pleasure to learn and that seem valuable to know."

Susan Brownmiller, The Washington Post Book World: "One has to respect the tenacity of Lillian Faderman for making sense of the evolution of lesbian life in twentieth-century America.... This is a remarkable social history.... Her study attains the depth and evenhandedness of a scholarly classic."

San Francisco Examiner: "An important and challenging work for lesbians and heterosexuals alike.... Odd Girls is a key work, the point of reference which all subsequent studies of twentieth-century lesbian life in the United States will begin."

Barbara Grier, Lambda Book Report: "Faderman's sweeping, mesmerizing prose accentuates the magnificent scholarship in this definitive account of lesbian life in the past 100 years.... Faderman has combined her talent and experience to accomplish this wonder."

Rita Mae Brown, author of Rubyfruit Jungle: "Nothing odd about Odd Girls——it combines clear prose with meticulous research. This book is an important contribution to understanding America and its people in our time."

The Independent: "A splendid, uplifting achievement."

Autostraddle "It’s chilling to read the back-and-forth between each triumph of queer culture and the inevitable backlash that followed it, and to trace the numerous societal forces that have conspired to make the world fear gay people — the near-arbitrariness of the modern Conservative religious push against LGBT rights comes into clear focus when you see it as just the latest opportunity for a ruling class to maintain or enhance their power at our expense. But the book isn’t about politics, really, and the most exciting part of the book is what survived and sometimes thrived despite all that, or because of it, and how that all led to where we are now."