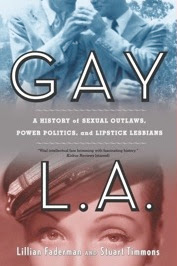 REVIEWS
Publishers Weekly "This social, political, and cultural history of lesbian and gay life in Los Angeles by two seasoned historians is easily the subject's definitive work ... [and is] filled with illuminating facts."

Booklist: "Archival sources dating back to the nineteenth century; interviews [with] 250 people; ... and many other resources, public and private, furnished the raw materials for their informative, detailed account, which finds that 'historically, more lesbian and gay institutions started in Los Angeles than anywhere else on the planet.'"

Eloise Klein Healy, Los Angeles Times Book Review "Faderman and Timmons deliver a meticulously researched history of the city to support their claim that Los Angeles is the city with the most influence on the gay movement over the last 200 years. … Technical jargon or theoretical baggage often weighs down studies of this kind, but Gay L.A. reads like a novel. Faderman and Timmons have set out a dramatic struggle with Los Angeles as its epicenter, a struggle that reverberates through red and blue states and that questions institutions as basic as marriage and definitions as ancient as selfhood."

Library Journal (starred): "[T]heir remarkable capacity for sharp, vivid description, buttressed by an impressive research regimen that included new interviews, makes Gay L.A. insightful, comprehensive, and fluid. Faderman and Timmons make an irrefutable case for the importance of the city to queer history, and they astutely depict the internal fault lines of the 'gay community', which has often splintered along racial, class, and especially gender lines but which has also showed itself capable of coalescing in the face of crisis. Full of fascinating anecdotes (including much on Hollywood), wise and fair analysis, and significant and inspiring examples of courageous resistance recaptures from the unwritten histories of the past, Gay L.A. deserves a place in every library."

Chris Freeman, WeHo News: "Authors Lillian Faderman and Stuart Timmons―both of whom are distinguished, award-winning writers and scholars―have done a remarkable job in writing a lively, thorough, inclusive, and engaging chronicle of the last 150 years of "gay life" in Los Angeles and Southern California….The book brilliantly shows us how we got to where we are―the good with the not-so-good, the egos and the martyrs, the heroes/heroines and the victims. All of it is presented in a handsome volume with great illustrations, a highly readable style, and an astonishing amount of primary research―hundreds of interviews and journalistic excavations that will dazzle and surprise everyone who reads this important book. Gay L.A. is a fascinating contribution to the history of gay culture in America. A must-read, it will educate and entertain even its most informed audience."

BLURBS
“An essential contribution to the history of gay resistance and the development of a polotical consciousness. This book documents important events ignored in other histories.”
—John Rechy, author of City of Night

"Finally, in one beautifully documented mosaic of a page-turner, the whole his and herstory of my city, L.A., revealed as an epicenter of LGBT presence: Gabrelino Native Americans, All Fools Night, 'criminals' in the shadows of bars and clubs, police entrapment, Hollywood stars with partners in their 'employ', organizing to fight back before most of the country even woke up, founding half of all the institutions you ever heard of, grabbing political power, the surprising joy of coming out and the devastation of AIDS, it's all here in Gay L.A. Love, hate, sex, death...and it names names."
—Senator Sheila Kuehl, California (D―Los Angeles)

"In this entertaining history of gay and lesbian Los Angeles you'll find everyting from 'nances and saphic ladies,' 'flutters and fruiters,' 'cuddle-for-cash-cuties,' 'pansy joints,' and 'flounce factories' to one of the earliest sexual uses of 'go down' in 1914. So go West with Faderman and Timmons to mad, bad, Gay L.A. It's a trip!"
—Jonathan Ned Katz, author of The Invention of Heterosexuality

"Gay L.A. is the long-awaited chronicle of Los Angeles' important role in the struggle for gay and lesbian rights. This documentation of Angelenos' considerable challenges and achievements during the 20th century is destined to become a classic."
—Jim Van Buskirk, co-author of Gay by the Bay and Program Manager, James C. Hormel Gay & Lesbian Center, San Francisco Public Library

"As a third generation Californian and a longtime student of gay and lesbian history in the Golden State, I am amazed at the riches contained in Gay L.A. From the region's indigenous peoples to its first settlers on Bunker Hill, from the birth of the movies to the age of ACT-UP, the panorama of our past is expertly uncovered. Simply indispensable!"
—Mark Thompson, author of Gay Spirit and former senior editor of The Advocate

"Energetically researched and vividly written, Gay L.A. chronicles the good times and the bad, in the closet and out, of gay Angelenos of every sort, as they sought their place in the sun and, in so doing, ensured that Los Angeles would never, never, never be a boring place."
—Kevin Starr, author of Coast of Dreams and California: A History

"In Gay L. A., Lillian Faderman and Stuart Timmons have not only brought a hidden history to light, they've made it panoramic. I can't recall reading a book in which Los Angeles―or any city―has been portrayed as such a fascinating multitude of private lives that were destined to become public. This book is entertaining, informative, meticulous, and necessary."
—Bernard Cooper, author of The Bill From My Father, Maps to Anywhere and Truth Serum