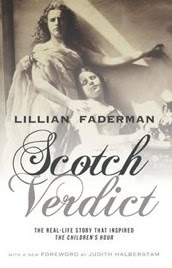 Karla Jay, Women's Review of Books "The records are fascinating: they open up for us the worlds of the young female student and the schoolmistress, as well as the workings of the judicial system of early nineteenth-century Scotland. Beyond that, they make us privy to a unique glimpse of what lesbianism was considered to be at the time.... A brilliant find."

William French, Globe and Mail: "Faderman, a noted U.S. feminist, recreates the trial superbly, using the original transcripts and her own detective work. She examines the trial from a feminist viewpoint, showing how it revealed the prevailing attitudes toward women in a phallocentric society. Her approach is valid and compelling, but her story is fascinating on many other levels as well.... Totally engrossing."

Aron Row, San Francisco Book Review: "An absorbing transcript detailing the evolution of our understanding of the sexual relationships between women using the Scotch trial as the lynchpin. The story is mesmerizing while the writing is riveting."